Williamsburg, Brooklyn — Hey everybody! The summer is flying by for everyone, and that includes the Bosch boys. Perhaps it is because they’re so busy trying so damn hard to entertain all their fans.

How do I mean? The Bosch has two shows coming up that are going to be super-bitchen: The first is this Saturday, 7/24 at the Luna Lounge, at 9:30 PM – come early for The Ninth Wave, an absolutely killer surf instro band from CT, and organizers of the amazing NESMA phenomenon. As always at Luna, the show is FREE and is conveniently in the heart of everyone’s favorite part of town, the Lower East Side.

The second is the following Friday, 7/30, at the Colossus 3 Loft Party in Clinton Hill, Brooklyn. 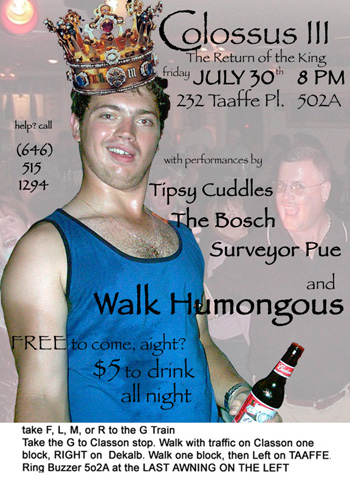 Colossus 3 features three bands plus the Bosch and promises to be a super-innebriated good time for all. No door charge, and it’s merely $5 to drink all night! Sounds awesome.

The Bosch has also received word that it will be playing in the MEANY festival. The specific date hasn’t been set yet but we’ll know more about that in August.

Lastly, I just want to mention that I had the not-such-large pleasure of drinking at my favorite watering hole, Snacky, with a certain Mr. J.M. Thompson, member of the class of 2003 of a certain Ivy League college located in NYC. Mr. Thompson split from our booth after consuming many beers, but didn’t leave a single greenback! And when I called him to let him know about his error, he was quite rude! Well folks, every band needs a nemesis, and since The Bosch hasn’t met Dashboard Confessional yet, Mr. Thompson, you’re it! If you see him, just tell him what Brett had to say about him: “Way to roll, dude!”