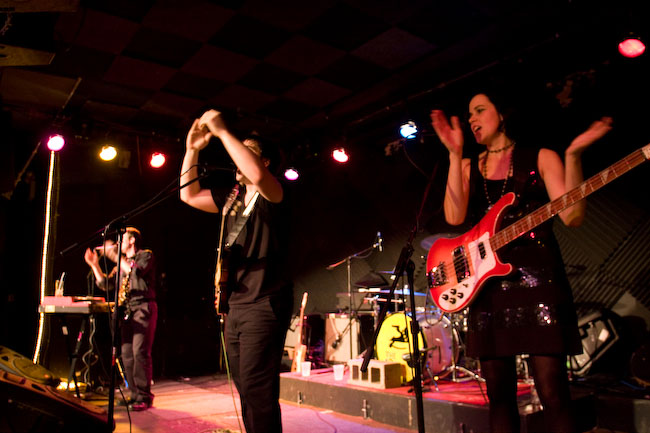 Greasy twang, driving rhythms, a sense of melody and brevity contribute to a sound that draws on influences from the entirety of rock and roll’s storied history. This is The Bosch, a New York City quartet who sounds something like what might happen “if Brian Wilson, Dick Dale, and Joey Ramone stayed up all night taking speed pills and Ritalin.”

With its latest EP, “Serious Entertainment”, the band showcases their high-tempo, high-volume melodic pop music. Matt Harrison (guitar/vocals) and Holt Richardson (drums/vocals) trace their musical collaborations back to high school days. Joined by Andrew Raff (saxophone/keyboards) and Valerie Sauve (bass/vocals), The Bosch sound like a raucous mix of The Clash, The Violent Femmes and Phil Spector with a side of Springsteen and a dash of Man… Or Astroman.

The band’s previous albums, Hurry Up and Buy One, Get One, enjoyed spins at hundreds of college radio stations, satellite, and streaming radio. The Bosch’s music has also been heard in independent films, the soundtrack of MTV reality programs, on video games and in national advertising campaigns for Volkswagen and Burger King. The Bosch – One Sheet